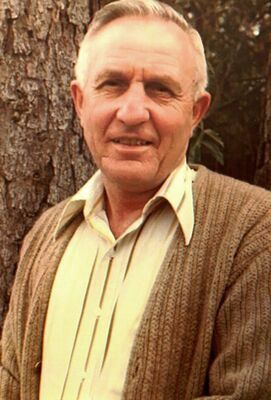 Whitey is survived by two sisters and one brother. Mary Ella Read and her husband Jim, Marnell McCoy, and Marlin Spears. Whitey had three kids with “Hank” Henrietta Waters who preceded him in death in 1998. Michele Richer, husband Pierre, Melissa Casteel, husband Tony, Myles Spears, wife Lisa. Six grandchildren, four great grandchildren.
In 2000, Whitey got married to his second wife, Amy Jones who preceded him in death in 2018. With the second marriage came more family for Whitey to care about. Family was the most important thing in his life. Whitey was looked upon by all the families as a hero, leader, and role model.

Whitey was born in Grand Saline, Texas on March 31, 1924. My grandmother used to joke that he was just a few hours from being an April Fools baby. Whitey told many stories about growing up in East Texas. Working the land with family. As he would tell it they grew a lot of vegetables and had a few old cows. Hauling the vegetables and cattle to Dallas would usually bring up some of the funniest stories because they were out of my grandmother's oversite. Whitey graduated from Grand Saline High School where he played football and basketball. After graduation he was accepted to Texas A & M College. He was supposed to graduate with the class of 1946 but a little thing called WWII came up. Whitey never hesitated, he quit A & M and joined the Army. My uncle "Chub" Whitey's younger brother told me that was the only time he saw their father "MJ" cry in the fields. Whitey wanted to go overseas as soon as possible so he was sent to Fort Chaffee, AR for deployment. He was assigned to Battery B672d Field Artillery Battalion. He was on a 155 Howitzer crew. They spent two weeks going to Africa and till his last days he hated the thought of taking a "BOAT" ride. He said that was the sickest he had ever been. He never bragged about his service like most of the Greatest Generation his reply was, "They all had to do their duty for the country." He served till the end of the war, He then returned to A & M and graduated in the class of 1949. His first job was back to his love of the land. He became a soil scientist for the Soil Conservation Service based in different cities the Rio Grande Valley. He met his biggest supporter "Hank" in Harlingen TX. They were married in 1951. Whitey worked his way through the ranks with S.C.S. He spent time in South Dakota as an Assistant State Conservationist from there he went back to Texas as a Deputy State Conservationist. He was promoted to State Conservationist of Arkansas in 1973. In May of 1979 Whitey was awarded the Superior Service award "For outstanding direction of Soil Conservation Service programs leading to enhanced environment and improved standards of living for rural residents of Arkansas.”
The award was given by then Secretary of Agriculture, Bob Bergland. Whitey retired in Little Rock and he and "Hank" did some traveling. He also worked a lot on his golf game at Hindman golf course plus growing vegetables in his backyard at 16 Queenspark.

Whitey believed in Family, friends, and fairness. He also believed

He also believed in declaring a Par on the #3 [Third Hole} if no Par was made. He became an ICON at Hindman Golf Course.
A public viewing / visitation was held on Saturday, January 09, 2021 between the hours of 1:00PM to 3:00PM at Roller Funeral Home 13801 Chenal Parkway, Little Rock, AR 72211 (501-224-8300) All attendees must provide and wear there on mask. We are limited to 50 people at any one time due to Covid-19.
Per Whitey's instructions he will be cremated, and his ashes spread to join “Hank" at South Padre Island, Texas.

For charitable donations in Whiteys remembrance.