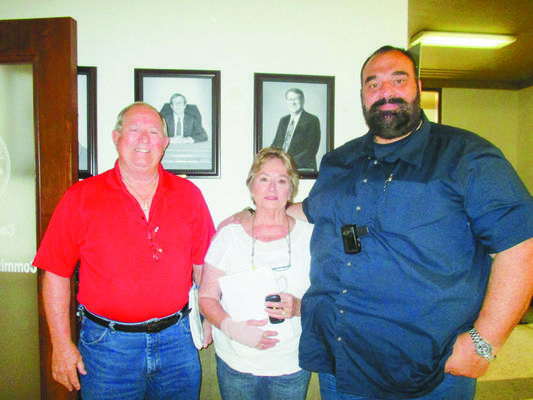 GRAND SALINE--Anthony "Big Tony" Katsoulas was informed that due to restructuring his volunteer services as Pct. 1 Deputy Con-stable, under Constable Mickey Henson, would no longer be needed. Kasoulas' dismissal follows a November 7, off-duty incident that is currently under review, in which he and a fellow church member were in a personal, unmarked vehicle following services, and the pair called into dis-patch to report a dangerous driving occurrence. The call resulted in no arrest, and medical attention was rendered at the scene to the driver. The fact that Katsoulas was in an unmarked car has raised concern and initiated the inquest to the call that was placed on a recorded line, but Katsoulas maintains that he was merely doing what any other responsible citizen would do if they witnessed unsafe behavior from another driver. At the moment, Van Zandt DA Chris Martin says no official proceedings have resulted from the incident, but he did say that actions taken by Katsoulas were be-ing looked at to see if bad action was present. Martin said, “There is no formal case or crimi-nal investigation of Mr. Katsoulas at this time. There is merely an in-quiry into the events leading up to and during the traffic stop conduct-ed by Mr. Katsoulas.” Specific details as to the incident, such as speeds during the ob-servance, and if all traf-fic laws were obeyed by Katsoulas and the driver of the vehicle, have not been obtained. Many sources famil-iar with the case could not comment, but one thing all of our law en-forcement sources did say--if you are ever in-structed to pull over by somebody in a vehicle with no markings, no si-rens, and no lights flash-ing, and you have con-cerns as to the validity of the individual giving the prompts, always call 911 and relay your ques-tions regarding the stop to dispatch or if your pursuant is a real po-lice officer, and they will give you instructions as to how to proceed, and will alert officers if they do not have officers patrolling in the area. Katsoulas became widely known during the previous VZ sher-iff ’s race, and has served the county under the former Precinct 2 Con-stable C.B. Wiley before his passing, and serving Pct. 1 Constable Mickey Henson, all out of his own pocket due to his personal wealth, and spent some $1200 per month in fuel expenses.