Eduardo Chavez ~You will never be forgotten~ 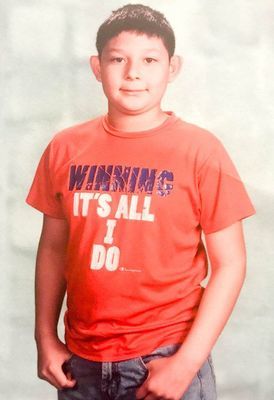 Interment followed in Woodside Cemetery under the direction of Bartley Funeral Home.

Eduardo passed away November 29, 2017, in Dallas. He was born October 19, 2004, in Sulphur Springs to Alvino & Hermelinda Loredo Chavez. He lived in Grand Saline where he attended Grand Saline Middle School and St. Celestine Catholic Church. He was a big fan of the Dallas Cowboys and WWE wrestling. He also enjoyed fishing and was looking forward to becoming a member of the GS Mighty Indian Band.

Eduardo is preceded in death by his grandparents, Margarita & Erasto Chavez.

Memorials may be made to Heroes for Children - www.heroesforchildren.org

December 3, at the funeral home.