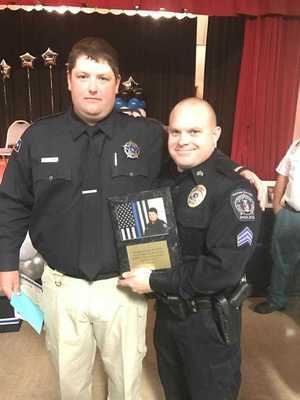 GRAND SALINE—In the most recent turn in the saga that has stemmed from the situation surrounding former Chief of Police Justin Collins, the acting department head has resigned just as the city council has taken the initial steps to fill the spot.
Grand Saline Police Patrol Sergeant Jason Burns has been filling the role of police chief since he and fellow officers rose in rebellion against the former chief of police several months ago. Justin Collins has since surrendered his license to enforce the law contingent to a plea resulting from the claims of the officers and the city has been handed the task of making the city whole again.
Since the plea and conviction of the former chief, many thought Burns was the front-runner for the position to replace Collins, but the city council chose the safe route of seeking outside applicants before making any personnel decisions.
The Grand Saline Sun has learned that the council independently reviewed the candidates, and each member was to bring their top candidates to the table for narrowing, subsequent interviews, and the final selection. In conversations following the resignation, the Sun was told by a source that Burns was on the short list of candidates desired by the board members. With his resignation, Burns has also removed his name from consideration for the chief position.
The move to leave the department follows weeks of both police and volunteer fire departments unsure as to the future pending the intended replacement of Collins with a Public Safety Director (PSD). Opposed to dedicated police and fire chiefs, the PSD is an administrative position that oversees both departments, and holds qualifications to do so without compromising the integrity of either—in theory.
Last week, the Grand Saline Sun received information that GSFD Chief Ethan Joslin, accompanied by another firefighter, left the fire department over their disapproval of the move, although a spokesperson for the city says that they have yet to receive a formal resignation from either. It is not known if Burns choosing to leave his post resulted from the projected new public safety structure. Burns was unavailable for further comment late Tuesday night.
Tuesday night, a source said that Burns’ resignation came as a surprise. The source also stated that Burns was in the top running for the position, so his exit also effects that process as they try and rebound from a trying past several months.
Although disappoint was expressed, stating that confusion was felt all around when Burns chose to vacate the department, our inside source did say, as they spoke cautiously, that they felt confident enough to say that the council was going to move forward in the best way possible and not allow the unexpected that may pop up to stop the march of progress.
With Burns stepping down, GSPD Corporal Eric Doering will be stepping up to run the department day to day according to the same source, and the department will be as strong and as vigilant as ever, the citizens of Grand Saline are still safe, and that criminals still have a reason to fear if they insist on breaking the law in Grand Saline.
Burns submitted his two week notice, but Wednesday was his last day to show up downtown, and he will be using accrued vacation time for the remainder of his stay. Burns is not leaving the public safety arena all together. Being the public servant that he is, Burns has accepted a position with the Society of Prevention of Cruelty to Animals (SPCA). Just because he will no longer be with the GSPD does not mean you will not be seeing Burns around, in his new role with the SPCA, Van Zandt County will be his primary beat when the weak are in need of a hero in VZC—he will just be saving the cute and cuddly, four-legged, furry victims that fall prey to man’s evil.
This story is developing, and all details are not known at the moment, we will update as it evolves.