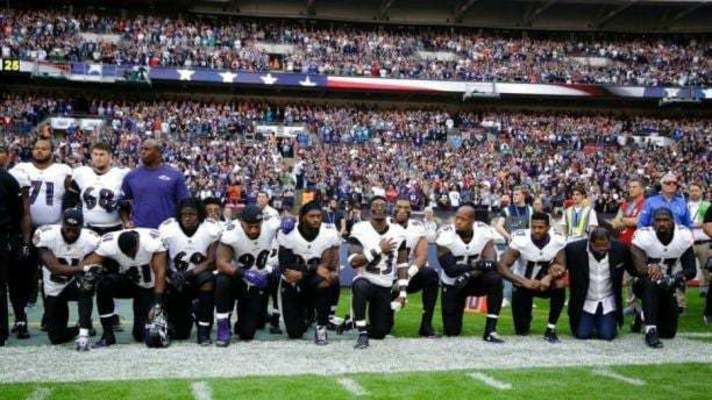 The National Football League and President Trump have recently engaged in a war of words that has resulted in a protest that has caught national attention and left football fans with differing opinion.
Following the protest that began to gain steam last season when a San Fransisco quarterback began taking a knee in protest to racial issues that the group feels that law enforcement targets and mistreats minorities. Over the weekend, 12% of the NFL's players took a knee during the National Anthem, some teams stayed in the locker room, and as the Dallas Cowboys, some teams had their own version of the display.
Fans have taken to the internet burning team apparel of players who joined in on the protest because they saw the action as disrespectful to our military personnel and the sacrifices of those who gave all on the battle field, while other fans supported these players right to free speech and the protests over the weekend as exactly why our soldiers sacrifice so much.
The debate has grown and is playing out on news media outlets across America, and now you have a voice in the discussion. The Grand Saline Sun has posted a poll on www.grandsalinesun.com where you can make your opinion known. Tell us what you think the consequences should be for players who do not stand for the National Anthem.