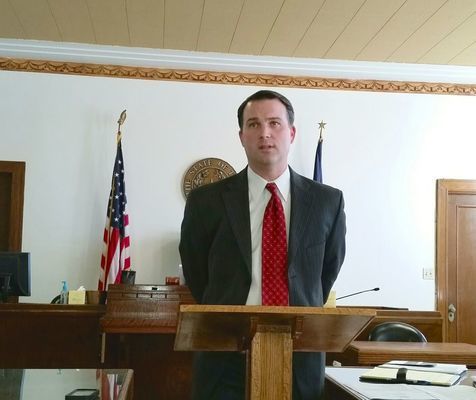 CANTON—Van Zandt County District Attorney Chris Martin responded via email to the Grand Saline Sun’s request for comment and has released the following statement as to his involvement and intentions with the Justin Collins investigation.

(The print version of the article was printed with an incomplete quotation from Grand Saline Mayor Casey Jordon due to a layout mishap. We apologize and have also attatched the full and corrected article that appeared in the 08/03 Grand Saline Sun below the Chris Martin statement.)

“The city of Grand Saline officially referred criminal allegations it had received regarding Chief of Police Justin Collins to the Van Zandt Criminal District Attorney’s Office on July 26, 2017. Due to Chief Collins previous employment within the Van Zandt DA’s Office as an investigator, DA Chris Martin said he believes a potential conflict of interest exists in the matter and has chosen to refer the investigation to the Texas Attorney General’s Office. Martin said he believes referring the investigation to an independent, outside agency is the best option because it allows for a fair and unbiased evaluation of the allegations and evidence. Furthermore, he believes that by stepping aside and allowing a separate entity like the AG’s Office to investigate and prosecute any wrongdoing that may have occurred, it should alleviate any concerns within the law enforcement community or the general public that favoritism will be applied to any of the parties involved. Martin confirmed that his request for assistance and all information received by the Van Zandt County Criminal District Attorney’s Office regarding this matter was forwarded and received by the Attorney General’s Office on August 3, 2017. In the meantime, Martin will await notice from the Attorney General’s office on whether they will or will not assist in the matter.

“If the Attorney General’s Office declines Martin’s request for assistance, he stated he will then refer the matter to the Texas Rangers Division for investigation and appoint a special prosecutor outside of Van Zandt County to review the allegations and evidence.

“Once the allegations are accepted by the Attorney General’s Office or by the Texas Rangers and a special prosecutor, Martin will separate himself from the investigation and any subsequent prosecution that may occur.”

GRAND SALINE—Many in Grand Saline are still reeling from the revelation that the Chief of Police and his 6 officers were at odds. At the July 11 City Council meeting it was learned that Justin Collins was placed on Collins Files Response; Investigation Handed to Third Party Agencies paid leave pending investigations that have landed on the desk of Texas Rangers. Since then the case has been reported to the FBI, and the TPMA is heading the charge representing the officers.

City officials remain silent amid the investigation concerning Collins, the investigation has moved into independent hands and the Grand Saline Police Department is moving forward with the same focus on public protection.

“We have turned everything over to the proper authorities, it is being investigated by them and that puts us on their schedule and do not know what that is.” Grand Saline Mayor Casey Jordan said Tuesday.

Mayor Jordan did voice his appreciation for patience as the city handles the situation. Jordan referred all other comment inquiries to city attorney Joel Elliott. Elliott said that all policy investigations were passed on to Justin Beckham with Wynne and Wynne and all criminal investigations were transferred to Van Zandt County District Attorney Chris Martin, but Elliott says that Martin intends on seeking an outside law enforcement to take the helm of that inquest. The Grand Saline Sun requested comment from Martin Tuesday, but had not received any response as of press time.

Justin Collins has filed his response with the city, and sources say that he has obtained legal counsel and is moving forward with his defense and claims of innocence. He has not made any public comments to date regarding the allegations against him.

The Grand Saline Sun has filed public information requests with the city of Grand Saline to obtain the TPMA filings, but those request have gone unanswered as of Tuesday.