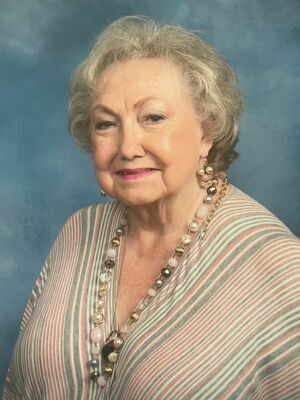 Roy Evelyn Stough Schoenfeld was born on December 4, 1937 in Grand Saline, TX to Roy Evins Stough and Cora Mae (Copenhaver) Stough. Roy Evelyn passed from this life to be with her Lord on Tuesday, February 22, 2022 and the age of 84.

Roy graduated Grand Saline High School in 1956 and attended Southwest State Teacher’s College (Texas State) where she met the love of her life. On August 30, 1958, she married Norwin Walter Otto Schoenfeld of Yoakum, TX. They have 4 children, 13 grandchildren and 5 great grandchildren.

Roy and her husband moved often due to his job but they took advantage of each place they lived; sightseeing, making new friends and creating wonderful memories along the way. Roy worked at various places, even earning employee of the year, but the job she loved the most was raising her 4 children. Once they retired and moved to Yoakum, they became members of Holy Cross Lutheran Church where they became active members and Roy sang in the church choir. Roy Evelyn was a loving and compassionate mother, the most wonderful Granny Roy, and a faithful friend.

Memorials may be given to Bethel Lutheran Church or your charity of choice.